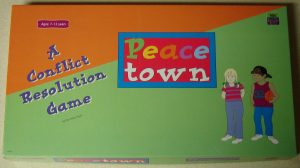 Children often experience conflict with family, friends, or classmates. Typical conflicts include teasing, arguing over who gets to play with a toy first, and quarreling about who owns a particular item. Unfortunately, most children are not equipped with the skills necessary to prevent or peacefully manage conflicts. Peacetown was created to teach children conflict resolution skills and give them the opportunity to practice those skills. By playing this game, clients can learn to work with other people to peacefully solve problems. 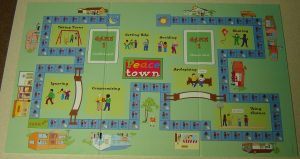 As players move around the board, they read Conflict Cards that have scenarios of conflicts that have occurred. Players choose from the available conflict resolution skills on the board for ways to solve the conflicts, collecting Peace Points for every appropriate answer. There is also a Team-Up element near the end of the game where players must form teams of two. Players then work together as teams to solve the remaining conflicts and pool their Peace Points together in order to win the game. It is the team with the most points at the end of the game that wins.

This game can be played with up to six players with a minimum of two players. It can be played in a school setting or in a private practice setting. Therapists or school counselors can play this game with one client and then team-up with their client near the end of the game. This is a game for elementary aged children ages 6 and up. 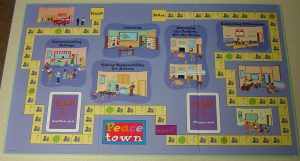